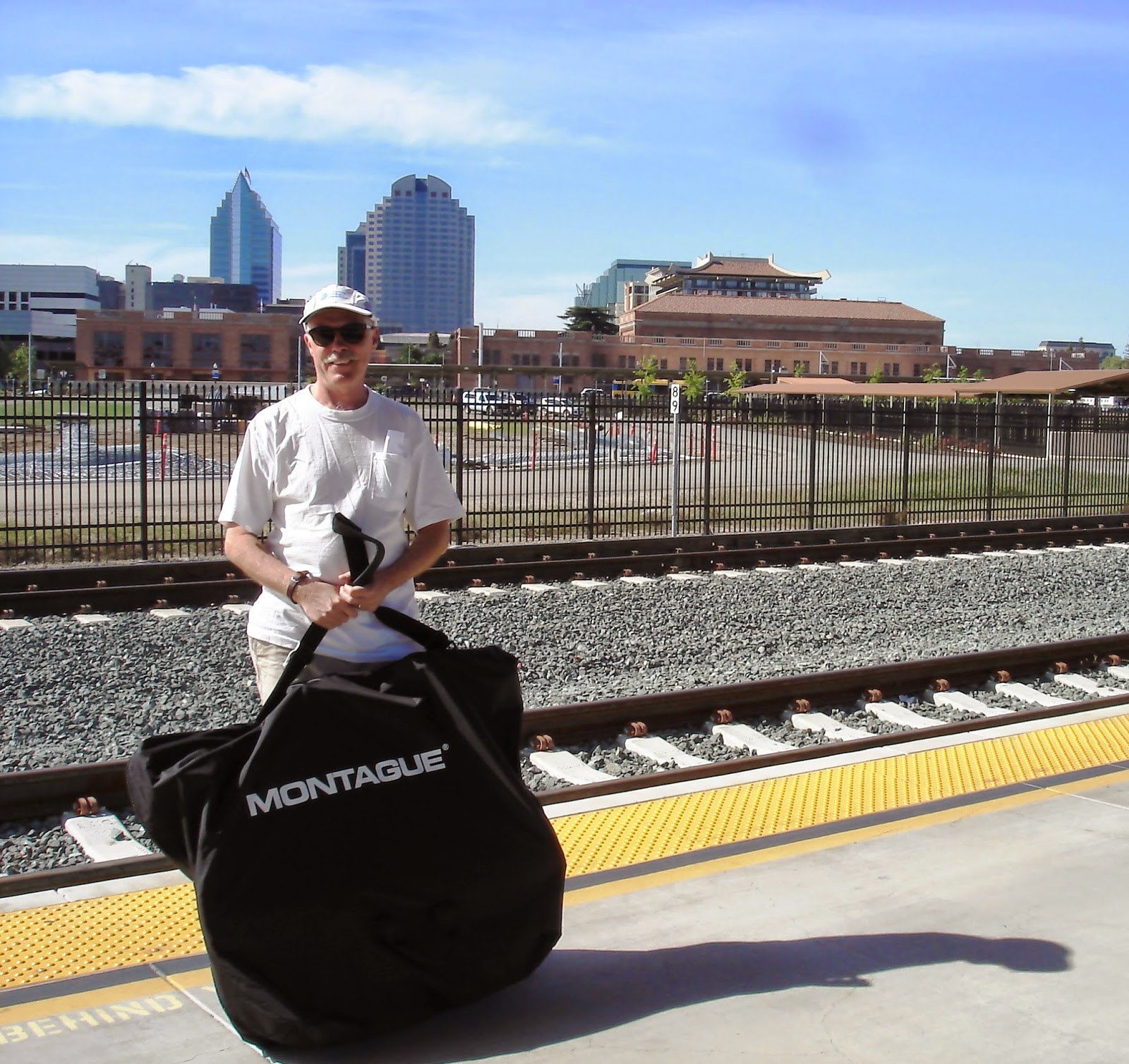 The modern bicycle is an intricate machine, one designed to roll along the earth, to gear up or down according to the terrain, and, of course, to brake when necessary.

Folding and packing the Montague into its soft traveling case was easier than my first time, chronicled in my January 17, 2014, blog entry. This time I had removed both fender attachments. In the California Central Valley's Mediterranean climate, rain really isn't an issue. When I travel this route again in late summer, I may not bring the fenders, or I may protect them with bubble wrap and attach them to the bike's frame during the trip.

I covered the gearing and chain with a protective cover as before and also slipped the shipping protectors onto the rear hub over the derallieur and through the front fork wheel slots. My one concern now is that the large front gear sprocket rests on the bottom of the bag (and, hence, the ground). It seems this may be a potential cause of damage if not to the sprocket then at least the bag. I tried placing insulating foam tubing around the sprocket, but the wheel and sprocket can turn some, dislodging the protection.

Other than that, I think further discussion should be on the Amtrak experience.

My return route with the bike this time was from California to Iowa. The first leg of the trip was on an Amtrak Thruway bus from Oroville to Sacramento. When the bus arrived at the pickup location, I told the driver that my "package" was a folding bike and that I'd like it stored with the derailleur up.

The driver said, "We're instructed with folding bikes to not touch them and let you store them exactly as you like," to which I replied, "That sounds perfect." I placed the bicycle in the lower storage area of the bus myself and also removed it at destination.

In Sacramento, the train tracks are about three hundred yards from the station and Thruway bus terminal. Electric shuttle carts are available for passengers and luggage. The cart driver told me that I could load "my more delicate items" myself. So once again I was able to take care of the bike myself. Riding on the cart, I situated the bike case so that I could sit in my seat and hold onto the carrying strap to keep the bike from shifting.

Once the Zephyr arrived, I asked the official where to put the bicycle on the coach car. "Just in the lower level luggage area if there's room." There was room for me to place the bike on top of luggage already resting on the floor section of the luggage section. My concern, of course, was luggage leaving and arriving as the train progressed on its journey, and whether the bike would end up being jerked around by passengers unaware of spokes and derailleurs, or whether new passengers would pile luggage on to of the bike.

I was traveling with the bike bag as one piece of my carry-on luggage, though, so the only solution I could think of was to walk downstairs after train stops and check out the bike, moving any luggage if needed to secure the safety of the bike. If I felt it necessary, I would talk with the conductor about any problem.

Sure enough, the next morning when I went down to the baggage area, there was a large suitcase on top of my bicycle. Had the bike been damaged? Was the derailleur bent? I found out when arriving home that the bicycle was okay.

I talked with a conductor about how the Amtrak folding bike policy was great--right up to when the carry-on bike was piled with other baggage. At that point the policy becomes risky or not user-friendly.

We considered options and decided that the lower coach area could be utilized. Sometimes there are no seats in this area, and sometimes seats are added for customers who have difficulty climbing the stairs to the main coach area.
Either option could provide safe space for folding bicycles in every coach car for little or or no cost. Another conductor (who owns a Fuji folding bike) also mentioned that the bikes might be placed in the above-the-seat baggage area in the lower section. It will have to be seen how stable that situation would be. I might suggest it my next trip, bringing along a few bungee cords to further stabilize the bike if need be.

I am sending a letter to Adventure Cycling Association, which as created a task force with Amtrak regarding bicycle policies, in order to forward my experiences and suggestions.

I arrived home in Iowa from a sunny and warm spring in California to a cold, wet spring--from green and blue back to greys and browns. It's still above freezing, though, and I'm glad to have my Montague Navigator back home for riding. I think I'll put the fenders back on, though.