So far this summer, I've ridden on my bike overnighters no farther than 20 miles in one day. There are a half dozen state and county campgrounds within that distance from Fairfield, Iowa.


I wanted to explore more, so on my last trip to Mac Coon Campground I  made it a day trip, 14.5 miles each way for a total of 29. That ride let me know I could reach to the next ring of campgrounds, those in the 30-40 mile range from Fairfield. I knew I could ride this range because I had regularly hit 30 when riding day rides in California; however, an overnight camping trip meant riding a loaded but that distance two days in a row. There are probably another ten campgrounds within this distance from my home, so riding this extra distance really expanded possibilities and wanted to go for it.


I chose Woubonsie Trail Campground in Cantril, Iowa, for my next trip, a round-trip distance of 70 miles. The trip began taking Libertyville Road out of Fairfield. At the town of Libertyville, the route led south on Highway V64, which was probably 85-90% of the trip.


Libertyville Road is a mixture of farmland and residences near to Fairfield. It was an easy ride, one I've made before on day rides prior to the creation of the Jefferson County Loop Trail.


After Libertyville, the road passed through more intensively farmed land. Then the terrain became more hilly, more suitable as pasture, although much was converted to corn and beans or alfalfa if possible. This was beautiful riding country even with the hills, except that there were a lot of grain semis and dump trucks on the road. I pulled off about a half dozen times to give traffic space and myself a safety margin. 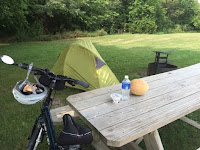 Arriving at Cantril, I found the campground suitable for a night's stay. The tent area was closest to the road, but the traffic died down after sunset. I'm sure the majority of the campground's business comes from RV's. At any rate, the restroom/shower area was clean and fresh, and a little extra food and sightseeing was just a short ride down the road to the Dutchman's Store, an old-style mercantile selling just about everything. There is a lot of flavor to the store because it caters to the Amish and Mennonite communities and also hires from those communities.


I left early the next morning because rain was expected. Because my legs were not 100%, I came home via highways 2 and 1, which was a flatter route, although the same distance. The volume of traffic on Highway 1 was high with quite a few trucks. I rode the verge more than I wanted, which was awkward because fresh gravel had been laid down, and it was still soft and loose. I'm riding Highway 1 on my next trip, but I'll take it on a Sunday, which should lessen the truck traffic.


The greater traffic lessened the joy of this trip, but there was a lot of beautiful country. I'm sure I'll be riding down V64 again.