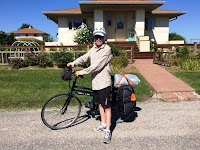 It was 15 miles from Jefferson County's AJ's Bike Shop, Fairfield, Iowa, to Morris Memorial County Park in Van Buren County, Iowa, and a nice ride it was, comprising county roads and gravel. On both the out and back legs of the S24O (sub-24 hour overnighter), it wasn't too hot, there was little wind, and the traffic was acceptable to negligible. I made the jaunt (17 miles from the m my house) in about two hours, including photo and video stops.


The campground has fifteen sites, and with no other campers (a quiet Wednesday) I chose a site with afternoon shade and morning sun. The campground is also home to several historical collections of farming and frontier life, housed in a frontier cabin, a small circular barn, a one-room schoolhouse, and a large barn for the larger farm implements and wagons. The campground has showers and modern toilets. 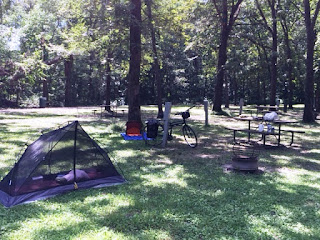 The country park is an oasis of trees and pond surrounded by farming operations. It was a safe and pleasant spot to spend the night. The 2+ miles of gravel put me deep in corn and beans with livestock thrown in. At one point coming home, I found myself scratching my head at an unmarked gravel "T" that I didn't remember. I tried GPS and was informed "no available route," but I expanded the map and identified the correct gravel to ride. 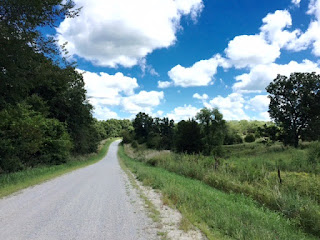 I saw a "century" farm, a hawk in flight, and a doe while on the gravel. The paved roads offered the rolling, rural roads of Iowa.


About thirty state and county parks are within 50 miles of Fairfield, Iowa. So far this riding season, I've done S24O's to four of them. I believe I'll manage to visit a few more before the nights grow icy.
Posted by Tom Kepler at 6:36 AM