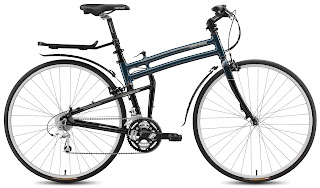 I bought the Montague Navigator primarily because I travel regularly by the Amtrak Zephyr from Iowa to California, and I wanted to take my bike with me. The Navigator folds and fits into a cloth carrying bag. It is allowed by Amtrak as one carry-on bag.

The bicycle works well for traveling on Amtrak. I've taken the bike back and forth across the country four times (8 trips), and have not had any problems with the bike or with the Amtrak policy. Once there was no room for the bike, but I just stood in the downstairs coach area and let the attendants figure the situation out. They placed me one car back, where there was more storage room.

I bought the bike online through NYCeWheels, and the bike came folded, well protected, and ready to go since I paid a little extra for a pre-tune from the shop. I also bought my wife a Navigator so we can load the bikes in our SUV and go for a day ride somewhere. On hers, I also ordered folding pedals, which facilitates folding. Mine I bought as an after-thought once I had the bike. The bike also comes with detachable fenders, which work well. I bought a different seat, since the Montague seat is very basic (basically, is was hard on my sit-me-down). There are screw holds for one lower bar (near the crank) waterbottle holder. Not really adequate. I keep more water in my panniers. 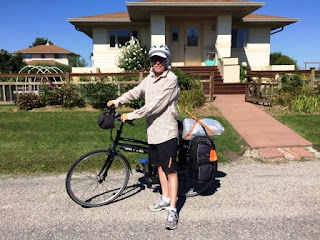 The gearing for the bike is not so much for touring--more for commuting--so when I ride the hills and mountains, I find I have to stand on the pedals more than some folks might like. Myself, I enjoy getting out of the seat, so the gearing is okay. The hills of Iowa let me do a little pumping, and then I can sit down again. However, if I were tackling some longer pulls, I would probably want a gearing combination that let me spend more time sitting and spinning.

The bike comes with stock 26mm width tires. I was getting many flats in California due to goatshead puncture vines, so I bought Marathon Plus tires, 28mm width. They work well and do not obstruct tire removal when folding the bike. One bicycle world tourist mounted 32 width tires, and her review stated she has to let the air out of the front tire to remove it.

I also replaced the basically worthless seat post rear rack that comes stock with a Topeak rack that allows me to use panniers when touring. This interferes with the folding function, but that is fixed by popping off the handlebars when folding. This sounds cumbersome, but go figure that I pack the bike, take it 2,000 miles, and then put it back together. A couple of weeks later, I repeat the process. This is acceptable. If I were commuting by train every day, the handlebar removal would be a pain. Now when folding the bike for the Amtrak long haul, I not only remove the handlebars but also the fender attachment piece for the front fender. The angle with which the attachment piece sticks out is just an opportunity for the bike to get scratched, gouged, or for the attachment to bend. Both pieces are easily removed with an
Allen wrench.

The bike is light and lively. I enjoy riding it. The shifting is not sloppy or sluggish, the Octagon adjustable height handlebar post allows me to be more upright most of the time yet to drop the bars when the wind whips up. I use a Bell Velcro strap-on mirror for the bike, so I can take it off easily when folding. I've used the Burley Travoy trailer with the bike, and the bike pulls it easily.

This 2015 biking season I toured on about 8 overnighters to county and state campgrounds in my local area--gone one day and back the next. The Navigator was a fun ride. I used rear panniers for the overnight rides, and the weight carried well. Riding the gravel had its challenges with the 28mm tires, but riding the lime chip loop trail around Fairfield, Iowa, was easy with 28's and even with my wife's stock 26mm tires. I plan to use my Raleigh Detour 2.5 next year when I'll be on gravel longer than three miles. As a hybrid, it should do better with its wider tires.

The Navigator has held up well for me with a season on short tours. One woman is currently riding the bike on a world tour. It has held up well for her. She did add stronger wheels and changed the gearing a bit. All said, this bike is adequate for touring, but the folding capability is its main positive feature.

I'm glad I have the bike to travel with and tour. There are better bikes out there for touring, but if you want to be able to have a touring bike with both 700c tires and folding capacity, I'd say that something in the Montague folding line is the way to go.
Posted by Tom Kepler at 1:33 PM