"Grandkids, the wife's new business, aging parents, the garden--no long tours for me this year," I told myself over the winter of 2014. And then I had a good thought, that there were about 20 state and county campgrounds within 40 miles of my house. Inspiration!

How about a goal of one overnighter a week? Well, I didn't hit THAT goal (see sentence 1) but did hit about 10 during this 2015 riding season.

Those overnighters, in addition to some great dayrides, provided a great opportunity for learning and for pleasure.


It was my great joy to discover the charm of local campgrounds. I had been to several and even camped in one local state park a couple of times (once on bikes with my wife several years s ago), but the detail of experience was so much intensified by arriving on bicycle. 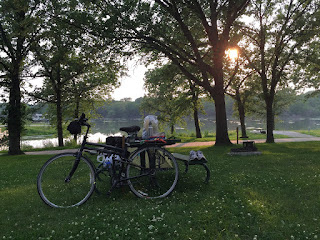 Local campgrounds highlight the beauty of where I live. Arriving by bike and tent camping intensifies the experience. Here is Lake Darling State Park, 17 miles from my home.

A sub-24 hour camping trip is really two dayrides with the added spice of a night in the woods. The S24O also has the advantage that anything left behind or any miscalculation can be solved by a morning's ride home. Therefore, I was more motivated to experiment and try different equipment or methodology on each trip. My shortest overnighter was a one-way jaunt of 4 miles to local Jefferson County Park; the longest was a one-way distance of 35 miles to the town of Cantril south of Fairfield, Iowa. Actually, the shortest trip was camping overnight in my yard when I was testing tent and sleeping equipment. Ironically, my backyard camping was one of the more quiet campgrounds . . . and had a great toilet and shower!

Just learning about what gear to bring, how to load and pace the trip, camp set-up and cooking, and packing for the return home were all stimulating and rewarding. One unexpected negative aspect of overnighters was that I found myself working in the garden of spending time with grandkids and then jumping on the bike and riding off--finding that overnighters aren't the best way to really get conditioned. As a special note for someone old enough to be a grandparent, there is a special joy to be on the bike, doing activity which is a demonstration of fitness. For me there is the pleasure of knowing that I have chosen the lifestyle of bicycle touring and have not lost the opportunity.


My father was an automobile mechanic, a very good one who actually had clients who would follow him if he changed shops.

"I've brought my car in for Harold to tune up."

"Harold will do it?"

My tinkering was not with mechanical devices but with the mechanics of writing; I became a writer and English teacher. However, I've always wanted to be "mechanical," even though it takes more planning than for some folks, such as my son and dad, who are truly mechanically inclined.

Becoming more serious about biking and taking longer rides to places miles away from help have provided a very real opportunity for me to 1)get the right setup for me bike, and 2)to learn some basic bicycle maintenance and repair. I've bought some Parker tools and bike repair stand and am enjoying the experience.

I've also become more informed about what bicycle to ride, what seat I'm using, and other bicycle specifics. For instance, I've be riding a Montague Navigator, a folding bicycle that allows me to carry-on the bike when traveling Amtrak. I've replaced the seat with a Serfa seat with springs and the tires with Schwalbe Marathon Plus tires, a necessity when in California with its goatshead puncture vines. In Iowa, most county campgrounds are out on the gravel, so I found the 28mm tires on the Navigator (it came with 26mm) are not great for gravel. They are OK for lime chip trails, though. What I'm in the process of doing now is taking my hybrid Raleigh, a Detour 2.5, and making it more gravel-friendly and more comfortable for longer distance. The basic frame and gearing are great; I'm just looking for better tires (maybe the new Kenda Flintridge tires coming out in 2016) and a thinner seat, which will probably be a swap to my Serfa to try that out. Working with my current bike instead of buying a new bike is a hands-on adventure for me. 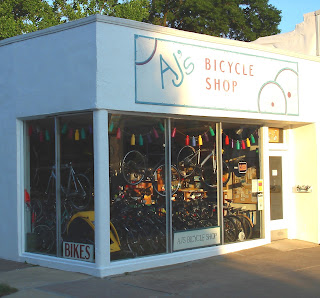 I fiddle with my bike, knowing if I screw it up, I can always take it to my LBS. Actually, I still take it in for the more complex stuff.

Cleaning chains, packing wheel bearings, adjusting brakes, fixing vine-punctured tubes--this has be, if not "fun" then at least fulfilling, a sort of homage to my dad, who passed away a year ago at age 94. There is the possibility of hiring my local bike shop pro for a few focused lessons over the winter months.


Overnighters are great practice for camping because it's "pack and get on the road" for evening and morning, and then "what will I do different next time?" Weight distribution, what to take, how dry should the tent be (how early to leave in Midwest dewy mornings), take a stove and what kind?, which sleeping bag, which tent and how many clothes. I read all about these decisions on CGOAB journals, about boxes being shipped back home, and now I'm enjoying the process myself. 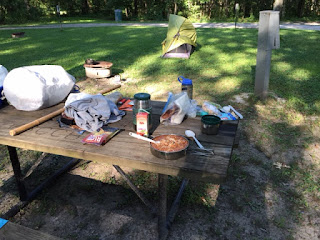 I usually bring a Thermos of fresh stew from a local natural foods store; sometimes I cook some noodles to add.

These one-day trial and error expeditions allow me to experiment, to makes mistakes, and to know that I'll be back home in my head nice bed the next night if I've erred. I have some equipment now that provides me with possibilities, good equipment. But is it really the best for me? I've found that I've got to temper my desire for the best, most appropriate equipment with a little frugality. (Note my earlier decision to change out a few aspects of my Raleigh rather than buy a new $1,000 bike!) Yes, I've bought some things over the last winter and this 2015 biking season that probably weren't the best choice, but sometimes finding the best is a process. If it's good enough, though, I'm content at this point to wear the item out or to at least use it for a couple or few years. Examples? I bought an Emberlit wood-burning "rocket" stove in December of 2014 and then bought a Trangia spirit-burning stove in September of 2015. Each works well, but really I get by mostly on my overnighters with a Thermos of stew, a sandwich, and cold cereal for breakfast. It's more enjoyable, though, to cook some noodles to add to the stew and to then fix some tea for the early morning. My justification was the Emberlit is great for most use, but then later I realized, what if it rains? The Trangia is a great and light solution. 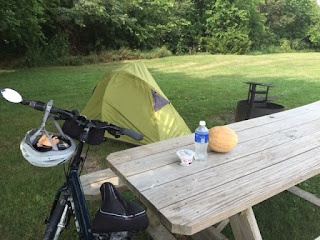 My ride to Cantril to an in-town park allowed me to buy a cantaloupe for a snack. The one-person tent prompted the habit of just leaving the panniers on the bike and tossing a tarp over at night to keep off the dew.

I've also been looking at tents. Tarptent Ultralight Shelters, for instance, has some great tents. However, I bought a $50 tent in December of 2014, a Texsport Cliff Hanger Three Season Backpacking Tent. The tent works well, even though it has drawbacks, such as being too short. Are there better tents? Yes! It doesn't leak, though, (I sealed the seams), it's not too heavy, and I plan to give it more wear before spending more money.

That's my motto now, actually. I've gotten through a season of overnighters, enjoyed myself immensely, and next season plan to use the equipment I've bought to extend my range, to increase the number of times I take off, and to perfect the use of what I've got. Honestly, though, I'll probably break down and get something this winter. I'm working for small stuff, though, little treats.


In conclusion, the realization that I don't have to do a trans-America or world tour in order to enjoy bicycle touring was very liberating for me. I enjoy discovering my local southeast Iowa camping gems. I enjoy a couple of days' riding and then seeing my wife again. I enjoy learning and growing. I could have passed this all up if I had felt that only long tours to distant lands were legit.

Whether I'm on my bike on a local country road or traveling on Amtrak with it and enjoying some dayrides, bike riding has influenced my life. I'll someday do some overnighters near my mom's California town of Oroville, but the current fee of $35 for the night (no hiker/biker!) had dimmed my motivation. 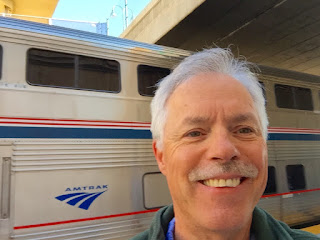 Next year I'll continue my local southeast Iowa dayrides and overnighters. I'll probably string a few together for a 2-3 day ride next summer. I might try a portion of the Mississippi River Trail, since I'm close to Ol' Muddy. I have many choices, I'm healthy, and I'm happy. And it all started this last season with me trying out my $50 tent in the rain in my yard. It's great to know that it doesn't have to be complicated.
Posted by Tom Kepler at 1:23 PM