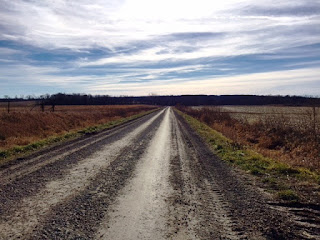 I'm riding down a gravel road that is even smoother than asphalt--gravel and good ol' Iowa mud packed to a porcelain-like riding surface. The day is near 60 degrees, little to no wind, and I'm out and about on my bike in December for a day ride to Turkey Run Wildlife Area in Jefferson County, southeast Iowa.

Besides being out on the bike on a warm and rare December opportunity, I'm checking out how my Raleigh Detour 2.5 with its 35c wide tires handles on gravel. I don't think this was a good test.

The trip, though, was a good chance to experience how hitting the "ripio" or gravel takes one far away from busyness, even in rural southeast Iowa. Yes, I did meet a few cars, maybe a half dozen while on the gravel, and I did pass some farms, including a couple of CAFOs hidden away, but the silence and the openness and the distant horizon did wonders for my psyche. 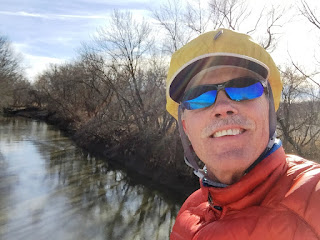 The next day was even warmer but also windy. Two days later, it rained and the road would have been mud, so I had chosen the perfect moment to plumb the gravel roads of Cedar Creek bottom and to check out Turkey Run for the first time. My route out of Fairfield, Iowa, was Glasgow Road to Osage Avenue, which leads to Turkey Run. On the way home I branched off west from Osage to 256th St., which took me to state Highway 1, which I took north back to Fairfield, ten miles out and ten miles back.

Turkey Run is not a camping area. It is set up for primitive camping for equestrians, and the park service said it would be okay to do an overnighter there with a bicycle. No water, no restrooms, and no electricity. Pack in and carry out.

I wandered around a bit, ate lunch, took some photos, checked out the trail, and then headed home. Turkey Run is a nice refuge for wildlife, and I have to say that I enjoyed my time there, a refuge from civilization, even if only a small patch in the gridwork of Iowa farms.

A Grocery Run with the Burley Travoy 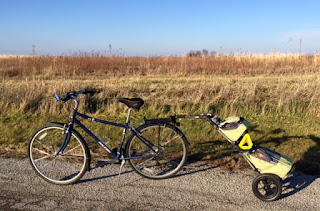 It's December, 46 degrees, and blue sky--time to take the Burley Travoy out to get some groceries.

This is my second post on a Travoy grocery run, the last about three years ago with a January test run. I have a different bicycle, but the trailer experience was pretty much the same. The trailer is just great for a grocery run. What I love most is unhitching the trailer and then using it in the store as a grocery cart while shopping. That's not only efficient but also a foolproof means of knowing everything I buy will fit in the Travoy!

The ride to the store is about 1.75 miles. Today it was into the wind on the way there, and I'm not sure yet whether the flat front of the Travoy catches the wind. Maybe it does, or maybe it was just a headwind. 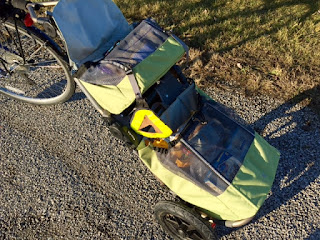 Coming home, I had to climb the steepest hill in town with the 25 pounds of food, and made it with no problems--which means some time totally geared down, and then a bit of upshift and standing on the pedals. I think, though, that the trailer rides more smoothly with weight. At least it is more quiet.

I had a full load of groceries, which included a gallon of milk and some space-taking crackers and chips. I put the eggs and glass in the top bag.

Notice I have the trailer attachment that fits onto the rear rack. I have to use that because the rack is too long for the trailer to attach to the seat post. However, the rack still has space in front for panniers or canvas bags.

It's great to take a ride while doing a chore. I brought home quite a few groceries on my food run. Now I'll have to hope for more good weather to work off all that chow! 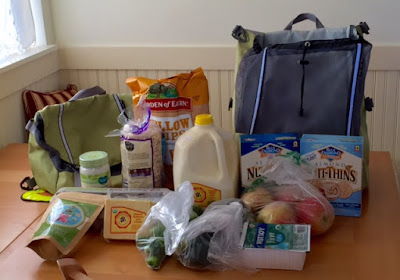 Posted by Tom Kepler at 4:15 PM No comments: