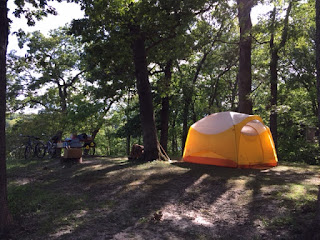 I sat on my cot in our new Big Agnes Big House 6 Deluxe tent, surrounded by space, which was quite a difference from sitting in my Big Agnes Copper Canyon UL one-person tent, where I have to be careful that my head doesn't brush the tent ceiling when I sit on the ground at the tent's highest point. Yes, this car camping and bourgeois biking was going to be a different experience!

It was Wednesday, late afternoon, and my wife and I had driven to Farmington, Iowa, to Indian Lake Campground, owned by the city. Originally named Duck Pond State Park, in 1952 the state of Iowa sold the site to Farmington because, according to the park manager, the state didn't want to have two state parks in the same county. 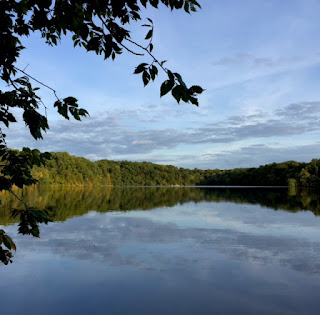 Now, in 2017, the campground and lake possess a "rustic" flavor (using my wife's descriptive) that is missing in some of the state parks, and I use the word rustic while acknowledging the word's positive and negative connotations. Yes, the park is obviously maintained with a lower budget than the state parks, and yes, the park retains a more organic, unique character than many state parks. There is the feel that the park was built around the trees, rather than a campground tract bulldozed into existence--and then trees planted. The park is clean yet comfortable with a little dirt, and includes a lodge and pavilion built during the Great Depression by the Civilian Conservation Corps.

My wife helped me set up the Big House, then left to return to Fairfield to work some more and return the next day to stay. I spent the night alone after setting up camp and text messaging my wife a few items we'd forgotten.

Thursday morning I spent my bourgeois biking time riding ten miles--first 1.5 miles to the Shimek State Forest headquarters to gain more information about the location of White Oak Campground, which was referenced on state websites and maps, but the maps used no road names and the roads in the state forest were not to be found on Google Maps. I finally located them by using the satellite function of the maps. My day ride then was another 3.5 miles on gravel to the primitive campsite. 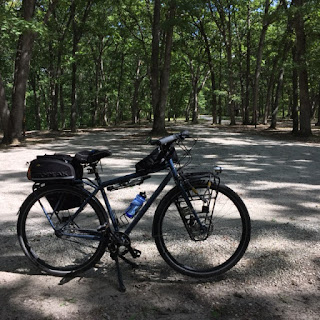 It was a real joy ride the route as it morphed from county road J56 to gravel Primrose Road to then a gravel road in the Donnellson Unit of the forest, a road obviously trafficked only by few. I was on my own. Reaching White Oak Campground, I found it much like Bitternut Lake Campground (where I spent the night on an earlier trip): lacking water, using pit toilets, and campsites consisting of fire rings and tables (with some RV gravel). Basic and beautiful, surround by trees, silent and still. These primitive sites in Shimek are the closest I've come in Iowa to feeling I'm surrounded by forest and not just camping in my backyard. It's what I experienced while growing up and camping in the national forests of California's Sierra Nevadas. 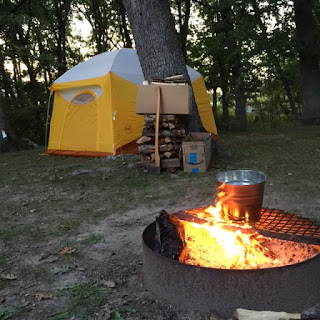 Returning back to camp and cooking lunch, which included fresh vegetables from the ice chest (luxury!), I welcomed my wife and awaited the next day's bicycling adventure, a two-mile ride on the trail that surrounds the campground's Indian Lake. The trip with my wife included some walking but included educational signage of vegetation, ecology, and history--specifically including Indian red grass, hickory and white oak trees, and Rattlesnake Jones Point (hopefully not the place Jones fatefully met his last rattlesnake!). 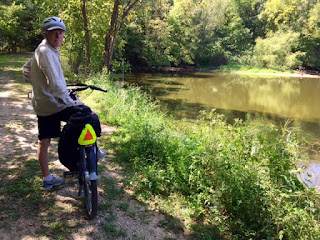 This trip included a small amount of bicycling but a great amount of joy because I was able to see some new places while abike with my wife. Exploring an area in greater depth, rather than just passing through, has its own special pleasure. I can see myself setting up base camp here at Indian Lake someday and then taking day rides on the forest's bike trails, and maybe even spending some overnighters in the forest's primitive campgrounds. However, my "golden dome away from home" will be hard to forsake! 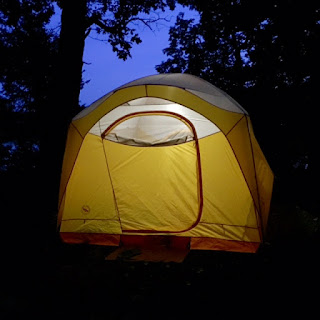 Posted by Tom Kepler at 7:15 AM No comments: