Reading good books about bicycling and camping is both inspiring and instructional. Below are some that I've enjoyed and reviewed. Links on the titles are my reviews. 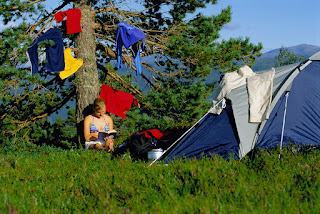 Miles from Nowhere, by Barbara Savage is one of the greatest bicycle travel journals or travelogues ever written.

Published by The Mountaineers, a non-profit outdoor activity and conservation club founded in 1906, every year the organization, in cooperation with Larry Savage, awards The Barbara Savage/Miles from Nowhere Memorial Award to "an unpublished nonfiction manuscript that presents a compelling account of a personal journey of discovery undertaken in an outdoor arena."

Beginning as no-nothing bicycle travelers and challenging the hills, winds, and rains of the American Pacific coastline, Barbara Savage and her husband Larry continue on through the Yukon and across and down the United States to Florida. Then it's on to Europe, Morocco, Egypt, and on around the world.

World bicycle travelers and authors of Bike Touring Basics and Bike Touring Survival Guide, Friedel and Andrew Grant, describe their book in the introduction as "a compact and inspiring introduction to the world of bike touring, from the planning stage through to the equipment you might need to get started." Basics is a smaller eBook that is free; the information in it has been incorporated into the more comprehensive Guide. I read the free Basics and then bought the Guide.

They state the book's purpose even more concisely on the title page: "A mini guide to bicycle touring, for people planning a first exploration of the world by pedal power." These words accurately describe the Grants' tightly yet warmly written eBook on the what-to's and how-to's of the bike touring world.

The title captures the flavor of this book, which is both compelling and insightful. The book is an excellent blend of description of the ride, the land, and the people, coupled with a life's worth of wisdom about what our journey of life, whether on or off the bicycle, is all about.


"When Don Petterson, a former American ambassador, told family and friends he intended to ride a bicycle from New Hampshire to San Francisco, most of them questioned his judgment, if not his sanity. He was in his seventies, hadn't been on a bike for years, and had never ridden more than a few miles at a time. But, in May 2002, putting doubters-and self-doubt-behind him, Petterson headed west."

Old Man on a Bicycle: A Ride Across America and How to Realize a More Enjoyable Old Age chronicles Petterson's ride, yet it also provides the reader with the distillation of Peterson's experience and research, not only of the ride and its environs but also on aging and how to stay vital. His Amazon Author page is also an interesting read and provides insight into Petterson's writing style. He has also written two books, one about the Sudan and one about Zanzibar, based upon his experience as a US ambassador. "Ambassador on a Bicycle" might have been a better title for the book!

In 2008, the Sathre-Vogel family--mom, dad, and two ten-year-old sons--began their bicycle trek from Alaska and the Arctic Circle to Argentina's Tierra del Fuego. The trip lasted about three years, and mother Nancy Sathre-Vogel chronicles the family's adventure in her book Changing Gears: a Family Odyssey to the End of the World.

Quite a journey it was, with desperately difficult terrain, medical emergencies, and equipment failure. Nancy Sathre-Vogel honestly tells their story, including her doubts and weaknesses, the powerful strength of family bonds, and the innocent exuberance of the boys.